I’m working from home today, post dental cleanliness.   This usually involves me setting up on the love seat with some kind of music playing.   I sometimes have my feet up on the coffee table, with my laptop, well, in my lap.  I have nodded off like this, though obviously not during normal office hours.   Obviously.

It’s a nice day out, so this morning I had opened the windows in the kitchenette.   Those windows are not fully visible from my little love seat office.    I was sitting her just now, looking at my open tasks, and trying to prioritize, and I heard a little noise. 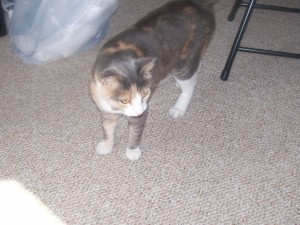 She is obviously not a stray.  She has on a collar with a tag and she wasn’t the slightest bit shy.  In fact she made herself right at home on the love seat: 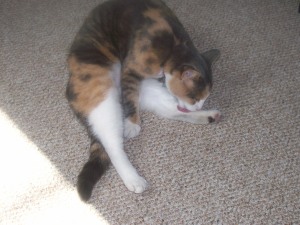 I figured she must have jumped in the window, though it’s pretty high up.   This was confirmed when I let her out and she did it a second time.   That time I saw her.  As much as I enjoyed the visit, though, she’s not mine, and I can’t keep her, so I let her out again.   This time I closed the windows a little more.

This confirms that I should own a cat.   I’m not allowed to have one here, but hopefully at my next place, they’ll allow it.  Obviously this little fuzzy one was drawn to me.

I just hope the squirrel doesn’t get the same idea.

I had my biannual teeth cleaning this morning.    They’re all smooth and clean.  I don’t want to eat anything ever again, so I don’t mess them up.   This is probably not very feasible.   The one sour note, though, I have one cavity, so I have to go back next week to get that taken care of.

I have to say, I love my dentist.  It’s not just because he’s super good looking, either.   He’s just super understanding.   I get really nervous when they have to do any kind of drilling on my teeth. so he always hooks me up with the nitrous, every time.   I know he sounds like a bit of an Elvis Doctor, but it’s nice that I don’t have to just suffer through it.    Also, he’s just about the only person that can call me kiddo, besides my dad, and it doesn’t sound funky.

Anyway, I still have all my teeth.  I need one little filling.   Not bad for a girl who never went to the dentist until she was 18.

Had to bail for a minute. #roadtrip #californiacoast #scenery