You know how there’s that party game, where you have to try to try to figure out who should play you in a movie?

Well, apparently they already made the story of my life into a movie, and I’m played by Dane Cook.  (You’re probably a little confused, but don’t worry, it’ll make sense in a minute.)

The other morning, I was on Instant Messager with Kayphore, as usual.   Blah, blah, blah, I didn’t sleep again, blah, blah, still sick, blah.  Same shit, different day, you know.   And then I told her about a certain realization that I have come to lately.   I am the perfect setup girl.  She didn’t quite understand what I meant at first, so I explained.

You see, if you date me or even if you just sleep with me, within a year you will be madly in love . . . just, you know, not with me.   At least the last three dudes I tangoed with are all, according to them, happy as freaking clams with some broad that they hooked up with within a year of dumping me.    One of them even had a baby with his new lady.  And there’s a chance that some guy that I only ever got to look at may be currently heading in the same direction, but it’s a little too early to tell in his case.  So, dating me sets you up to fall in love with someone else.  How convenient!

Anywho, I was relaying all of this to Kayphore, and she says that it sounds like a crappy movie that she didn’t see.   I responded that it did sound like the kind of thing that could be turned into some kind of banal romantic comedy, and she replied that it was really already an actual movie.   A couple of minutes later, after what I assume was some sort of scouring of the inernet, she came up with it.

Every time unlucky-in-love Chuck (Dane Cook) breaks up with a girlfriend, that girl ends up engaged to her next boyfriend. Women are soon knocking on Chuck’s door, hoping that after enduring a few dates with him, they’ll meet Mr. Right, a gamble that works out better for the ladies than it does for Chuck. But when he meets klutzy penguin trainer Cam (Jessica Alba), Chuck realizes that he has to stop being a way station on the path to love.

So, of course it’s in my queue now.   And it’s probably going to be horribly bad.  But it’s like an opportunity to watch yourself in a train wreck.

I guess the question is, who’s better looking . . . Dane Cook or Moi? 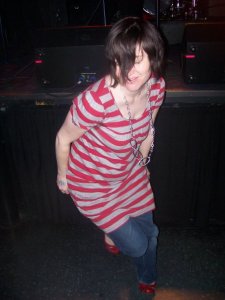 And if you want to be madly in love sometime in the next year, you know, call me . . .

What do you want to know? I'm a California native, and right now, I live 6 miles from where I was born. I'm single. I'm a feminist. View all posts by peggyluwho