I just got a new one, and I am feeling a desire to catalog them.  For the entire world.  On the internet.  I’ll just go ahed and tag this one “stalker bait”.

This was my first.  The dia de los muertos sugar skull.  To remind me of people I’d lost, namely my sister, and to remember to celebrate death as part of life.

My second was a reminder to myself that today I am alive, but there’s no guarantee I will be tomorrow.  Life is short.  Live the shit out of it.

This one has a couple of different meanings.  It’s a reminder of home and childhood, yes, but also, I got it during the 2010 World Series, that was won by the orange and black wearing Giants.

Beautiful.  I am beautiful.  You are beautiful.  Each and every one of us, all of the world and all of humanity is beautiful. And if anyone says you’re not, I advise you to ignore them 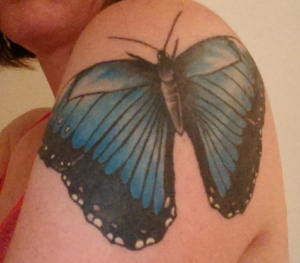 This blue morpho is to remind me of Costa Rica.  There’s more of the world to see, and more butterflies to find.

My latest, incomplete.   Because you know what make for a cool tattoo design?  A mechanical, clockwork owl.

What?  I can’t always be deep.

Some time ago, it occurred to me that there were some things that I would like to do in life.  These things were for me, and no one else.  They weren’t things I planned to do to help me make more money or get a better job.  They were just things I wanted to accomplish.   And that was when I came up with my list of four Big Life Goals, and they are, sort of in this order:

Those are some pretty decent goals.  It’d be nice if I could get them done, in my limited time here on this rock hurling around the sun.  But, like I said, I’ve had this list for awhile.  And to be bluntly honest, I haven’t made a lot of progress on any of them.   Which is not to say that I haven’t done any work on them.   I’ve got about 27,000 words written of a rough draft of a novel.  I’ve got a couple other ideas for other novels, too.   I have picked up a bit here and a bit there of computer programming, especially in my job.  Every once in awhile, I pick the guitar that’s been laying about my house for the last 4 years, and I learn a simple tune.   And I became good enough at French to be able to find bathrooms before visiting Paris.

But a couple of weeks ago, while I was supposed to be studying for this online course I’m taking on Python (a computer programming language), I caught myself procrastinating by reading this article about procrastination.  I got there because I was on Facebook, and a friend of mine sent me a link to one of their other articles.  And thus the spiral began.  I’ve been down this road before.  One YouTube video leads to another.  Just one more tiny home.  Or one documentary on Netflix about Mortified leads to three more, and then it’s one o’clock in the morning, and I have to get up for work the next day, and I haven’t read a single paragraph of my text book, or learned any new code.

I procrastinate big time.   I always have.  And for most of my life, it hasn’t really been that big of a problem.  I got very good grades all through school by writing papers the day that they were due, usually starting them at six in the morning.  The pressure combined with caffeine and sugar helped me turn out some really smart, well supported theses with many typos.  I wrote them so last minute that I never had time to proofread them.  And like I said, I got very good grades.  So, I was never really motivated to do anything any differently.  It just kept paying off.

And it wasn’t just in school.  I played in bands where I learned my parts only when we had a gig coming up, and I had the fear of public embarrassment to motivate me.  At work, I always start things in the hours before they’re due.  I have a really hard time starting something ahead of time, and if I have a couple of weeks, there’s no way I’m starting it today.

It occurred to me, therefore, that on my list of Big Life Goals, getting this procrastinating thing under control ought to be number one, because those other goals aren’t the kind of thing that I can start at six a.m., and have possibly have finished by two in the afternoon.  If I’m going to write a novel, it’s going to take weeks, if not years.  I’m going to have to start working on it sooner, rather than later.   There is no way that it’ll get done if I keep putting it off every day to watch the latest upload to the Last Week Tonight feed on YouTube.

So my list Big Life Goals, as they stand right now, sort of in order, and subject to change whenever I see fit, without notice is:

Stay tuned for further updates on my progress on tackling challenges, staying motivated, and achieving my goals.

P.S. This is the beginning of the post I was going to write, and teased in the intro, of the post “Not Going According to Plan”