I was saying all day that they wouldn’t get violent again.   The Bacon was in custody.   And OPD would be all over it.

Well, I was wrong.   Right now, on the news they’re saying about 40 people are running around downtown breaking windows.

It apparently started very peacefully, with about 1,000 protestors.  Once most everyone went home, a small group started smashing windows.   I think it’s pretty clear that this is not a case of some people who were overcome by the tension or emotion of the protest.  These are the folks who had every intention of doing this from the start.

I’ve seen some comments online over the last few days, people who seem to have something against capitalism.   They’ve been talking about targeting business.

What, if anything, does this have to do with the issue?   Do they even remember what happened?   Are they thinking of Oscar Grant and his family at all?   This is not how change is achieved.

I’m really bummed out, and completely pissed off.

Over at Oakland Living, they have posted a list of businesses that were vandalized during the riots last Wednesday.   I decided to go and visit one of my favorite take out spots which had their windows broken, Take It Easy.

Also, the tattoo parlor where I got my first tattoo in November, Temple Tattoo, had their windows broken, too.

While I was on my little walk, I saw some inspirational signs of what I think is true spirit of Oakland..    I snapped these two shots on my iPhone. 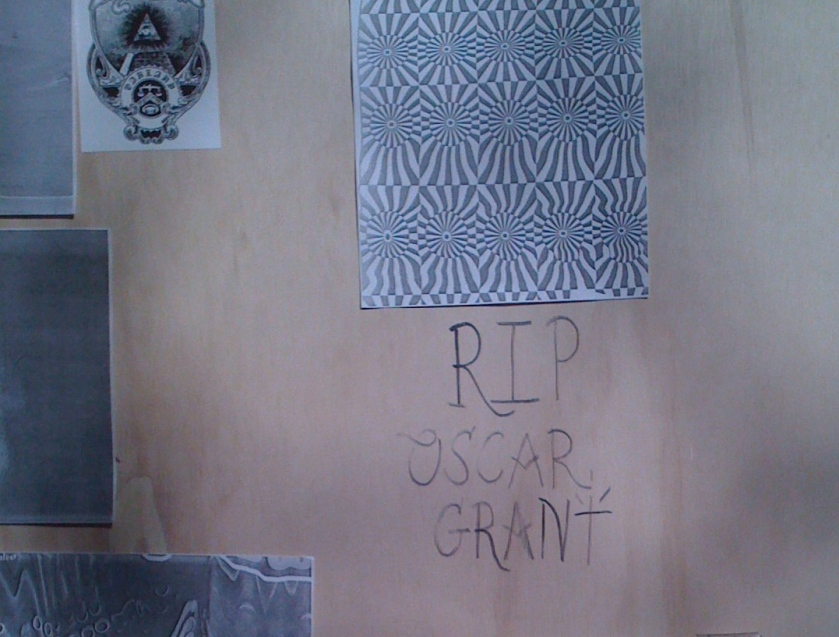 My city is angry, and I understand why. A young man, who was held down on the ground and handcuffed, was then shot by a police officer. (Fucking cops!)

Compounding the issue is that there hasn’t seemed to be any real action on holding any of the officers involved accountable for the death of the young man, 22 year old Oscar Grant who was laid to rest yesterday.

So, people took to the streets. They met in protest at the BART (subway or tube to the rest of you) station where he was killed. They gathered to speak about the young man, and to express their anger towards the bullshit that went down on New Years Day at that location. And some folks then marched that location to downtown Oakland.

And some of those people, well, I don’t know what the fuck their problem was. Some shitty shit happened, yes, but does that justify burning cars, dumpsters, garbage cans and breaking windows in stores?  Hell no!

I saw none of it. I was not in downtown. When I got off work yesterday, I got on my bike and rode home.

Some folks were there – Richard and Becks wrote great blogs about being there.

I love this city, and I hope we can find a way to work it out and express our anger without burning the whole city down.