If you remember from last time, I went over some tips and techniques for beating a procrastination problem.

I have to say  that in the weeks since I decided that I really wanted to do something about this problem, I have gotten a lot more done.  I’ve been more consistent in studying my programming, and in writing.   I started that YouTube channel, which I think falls under the category of writing.   I feel more productive, and I think that is having a positive effect on my mood in general.   I’ve also become very protective of my time.

When I set out to do research on beating procrastination, I discovered that there are a lot of tools that are available to help a person be more productive and manage their time.   I want to share some with you, because some of them have changed my life.  Since I am a Mac computer user, a lot of the computer apps are geared towards Apple.   That being said, I don’t own an iPhone, so I’m not completely biased.

Notes and Lists and Things

The first thing I found that has really been helping me out is Evernote.   They have a desktop app, a website, a tablet, and a phone app. (Yep, even for Android.)   The thing that is so great about Evernote is its versatility.  You can make into almost anything you need it to be.   It can be your calendar, your contacts, a notebook for saving ideas, and probably a dozen other things that I haven’t even thought of yet.  It even has the ability in the phone app to do voice notes, if you can’t stop to type it in.   It has a structure where you create notes, which can be saved under notebooks, and those notebooks can be stacked.   There’s a ton of tutorials on YouTube for the different ways that people use it.   I may do one of my own.

I have mine set up in two basic ways.  First there’s the to-do lists.  I’ve always been against the idea of a to-do list, but somehow being able to set it up my own way in Evernote has really made it more bearable.   There are four of them, Today, Tomorrow, This Week, and This Year.  Every day, I write a list of the things I want to get done.  For today, I had blog, laundry, and study.   (Blog…check.)   It even lets you format with little check boxes, so you can check things off when you’ve completed them. 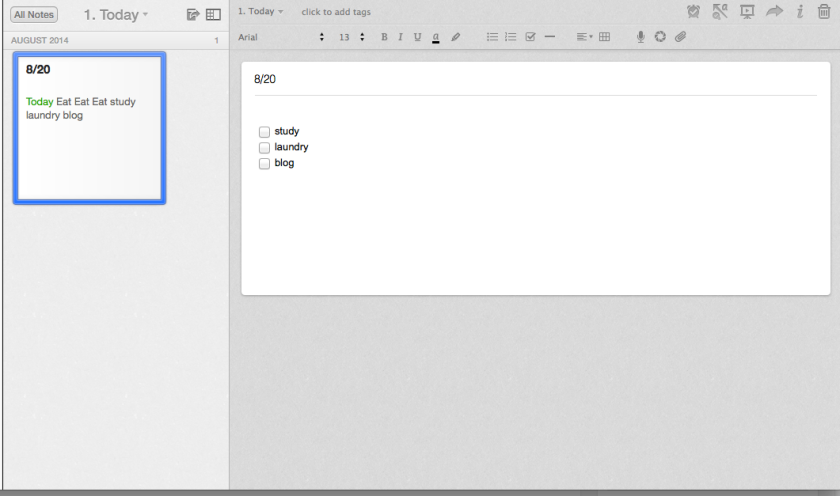 Then I also make a list for what I think I want to work on tomorrow.   And then that all sort of rolls up into a weekly to-do list, that looks like this: 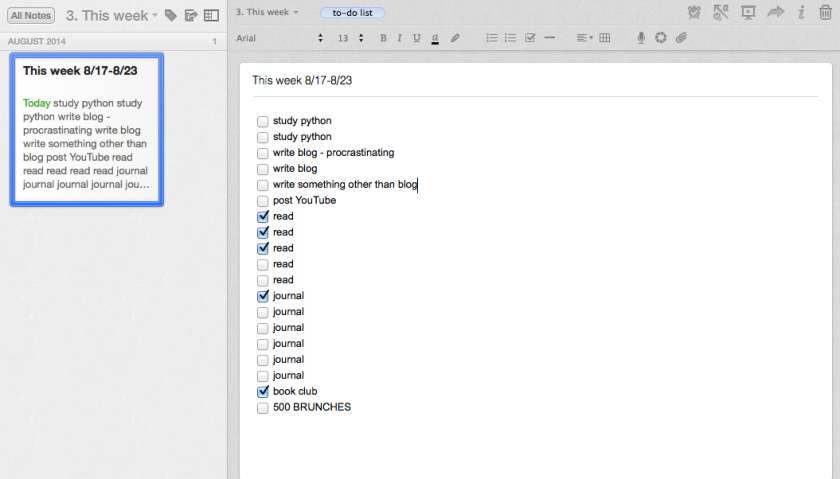 So, if I know that I want to study twice per week, then I know I have to put it on this list for today and for tomorrow.   I also like to keep in mind any events or plans I have.  If I’m going on vacation, I’ll put less on the list, and not over commit.

The other section I set up in Evernote is basically just a bunch of organized notes.  It’s my repository for ideas and things I want to remember.    When I’m at work, I log into their website to take notes in meetings, and write to-do lists.   I have one long ongoing list of notes from every meeting I have with my boss.  I have a list of blogs that I want to read later, ideas for future blogs I want to write, ideas for future YouTube videos, short story ideas, novel ideas, study notes, awesome sentences I thought of or overheard that might make be a great first sentence of a story, a list of websites for things I might want to do on my next vacation, so many tiny houses, and for some reason, a single note with a url for this.

Evernote is great, because you can bend it to your will.   But if your problem is willpower, then these next two apps could be helpful, Freedom and Self-Control.  Freedom is an app that makes it impossible for your computer to login to the internet for a set amount of time.  I hear that Michael Chabon uses it when he’s writing.  This is great for me if I’m working on just writing a story, but not so great if I’m doing my online Python class, which of course requires me to be on the internet.   That’s where Self-Control comes in handy.  It’s very similar to Freedom, in that it limits your internet and has a timer, but it works with a blacklist.  You basically add the sites that you find yourself being distracted by, like Facebook, Twitter, and Youtube, but you can still get to the rest of the internet.  I like to break my work periods up into 45 minute chunks.   I mentioned the Pomodoro Technique last time, and yes, there’s an app for that, too.   Although I haven’t tried it.

There’s also another app that I haven’t tried, which I may.  It’s called Habit RPG.  It basically turns your daily tasks and productivity into a video game.   You get points for checking things off of your to-do list, and achieving goals.   I read about it in this article on Lifehacker, which was all about how to “gamify” your productivity.   Gamification is huge right now.

Those are all some really great positive reinforcements, but like I’ve mentioned, I’m pretty highly motivated by negative reinforcement, mostly by way of fear of public embarrassment.   This is where the website stickK comes into play.   stickK is a website where you can set a goal, make a commitment to follow through with that goal, and if you don’t, there’s a consequence.  There’s a lot of options on the site for what the consequence might be, and they’re optional.  However, one of the more popular features of the site is that you can set as your consequence that a certain amount of money will be donated to an anti-charity of your choice, should you not meet your commitment.

This is where it gets good, and you get to cheer me on or root against me!

Since one of my Big Life Goals is to write a novel, I need to be writing more, like a lot more.  Not just on my novel, but in general.  It’s a muscle that needs exercising.   So, for the next six weeks, I commit to writing at least one blog post of 300 words or more per week.  Linking to an article with a three sentence summary of my feelings on it won’t count.  Pictures of my cat won’t count.  YouTube videos won’t count.

Do you have any tools or apps that you use to keep yourself on task?   Do you have a specific way of setting up Evernote that helps you stay productive?

Do you think I’m crazy for even risking donating to the NRA?  Are you pissed that I would choose the NRA as my “anti-charity” and have a lot of things to tell me about your Second Amendment rights?

Leave your comments and questions below!   Just sayin’