Yes!  This is totally misogynist!! 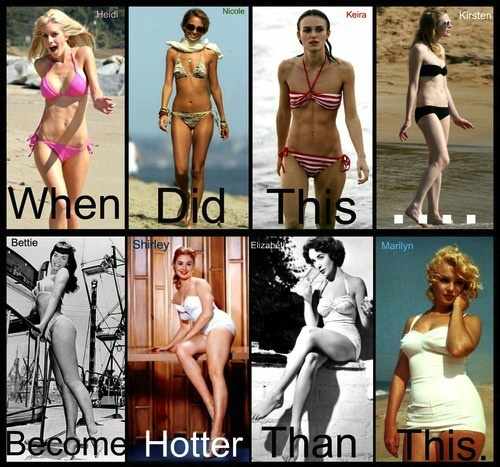 “Because, OMG, skinny bitches are gross!  Who would want to fuck that?  Amirite?”

People’s bodies come in all shapes and sizes.   You don’t have to be attracted to them all, but you sure as shit don’t need to do line-ups of one type against another and then post (or repost) some body policing shame-a-thon up on a social network in order to get high fives and ‘likes’.

And if you thought this was somehow empowering, think again.   Our body shape and size is largely determined by genetics, so how is this compare and contrast line-up supposed to make anyone feel better, when all it’s really doing is saying, “If you look more like the women on the top, well then it sucks to be you, because you’re scary!”  And the overwhelming majority of us look nothing like either of those two sets of women. “Real women have curves.” No, actually, not all women do, and it doesn’t make them any less fucking real if they don’t.

Also, and why isn’t this the most obvious fucking thing ever, but all the photos featured in the bottom row are obviously from fashion shoots, while the ones on the top are candid shots of celebrities who happened to be at the beach?   No one looks in real life like they do at a photo shoot!  Even before Photoshop, they would still pose them, and stitch them into swimsuits that would be most flattering, do tall their hair and makeup, so comparing a model shot of Elizabeth Taylor to a shot of Keira Knightly just hanging out at the beach is fucking ridiculous.

If you want to encourage acceptance of women’s bodies, you should find an image that is a positive portrayal of multiple shapes, colors, sizes, without imposing a hierarchy.   Something like, I dunno, This…